Getting more than you paws wet!!

our intended plans were altered today.  The visitors have booked a rather large holiday home and their kids turned up unexpectedly to surprise them so we are meeting for lunch when the kids are back in school later in the week instead.  That was fine by us as it meant instead we could go to our local beach instead.  It isn,t very big, is rather stoney and is not as popular as some of the other nearby beaches .. It has a cafe , car parking and loos , all you need really.  So we grabbed the chairs, and other beach bits one needs including Dexter as this beach does not have a in season rule during the summer and so he can romp to his hearts delight, and boy did he!

We arrived to find one parking space left.  The beach itself didn,t seem busy though.  We parked in our favourite bit of the beach.  Dalmatians can be very vocal especially when excited .  Our big fellow is no exception he greeted everyone with his big "woofs, thankfully as Dalmatians seem to we got the usual "oohs " and kids asking to stroke him  and my least favourite "where are the other 100" groan, groan, if I had a pound for every time we have heard that!!!! Anyway Little man as usual stripped off in record time and went into the fresh water stream bit shown in the pictures.  It is much safer than the sea and off course not salty. But it was chilly and Little Miss dipped her toe and declared it was too cold to even paddle.

Well Dexter or as we call him when he is good "Dextie" has never really liked water.  Even when we lived near lakes in a country park he never went deeper than up to half way up his legs.  When we moved here we thought he may get braver but never has.  And as for baths or a play with the hose pipe forget it!  He runs for his life to hide when the hose pipe goes on and if he needs a bath off he goes to the groomers.  At 37kilos and solid muscle I am not attempting to lift him in or out of a bath any time soon!!!

We took his big ball, which along with his red much smaller ball so fair has not been destroyed by
his chewing and started throwing it . But then DH threw it just a bit too far out.  Then it happened... 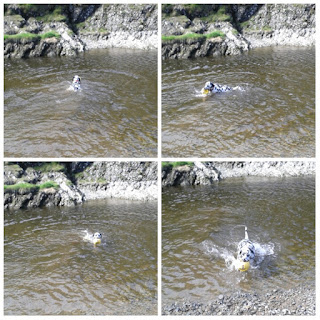 People were giving us weird looks
They must of thought
We were bonkers clapping our pupster
But he is nearly 5
And well we didn,t think he would ever
Be brave enough,
Must of been the thought of losing yellow ball that
Did it.
Thank goodness I was busy taking photo's
And captured it.

I did give my DH a weird look
Though when he said
" wasn,t that great? Just like when he was
A pup and cocked his leg
For the first time"
Just like a proper boy dog ..."

Now I,m sentimental , but I just
Looked at him,
And for the life of me
Could not see the comparison,

Must be a man thing! 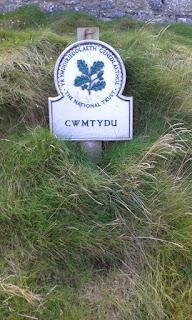 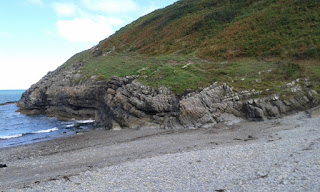 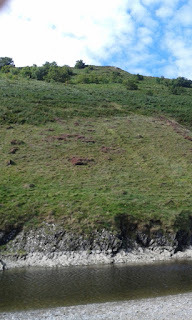 The coastline is very rugged
And steep
Untouched ..... 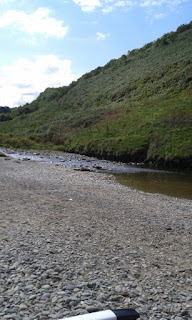 But I love it here.
Sometimes I look at beautiful
Cottages nearby
And think
I would love to live here
But to get here the road is narrow
And in the winter
Well a different "kettle of fish".
Seals come onto the beach in spring
To give birth.
This year I missed it
But next year...

See you all soon
Xxxx