Did you play this game when you were a kid?  You needed a group of kids and the game went on forever... You had the story teller who held out their hands. Each kid held a finger and the teller told a story and incorporated in the story they had to use the words "sticky fingers" .  When they said those magic words the other kids had to run off and basically a big game of chase happened ....when the teller tapped you , you had to stand still and another kid had to crawl under your legs to set you free.  After you were tapped 3 times you were "out" and the last kid (not the teller) left won the game and became the next teller.  My kids laugh so much playing this game with their friends.

Well last night I felt a bit bored and got my die cutter out and decided to make some decorations after all.

I love felt and it cuts so well through the die cutter and my little Eriks were popular last year at the fairs, but they take quite a bit of sticking together before you even begin to stitch them..so I thought I would at least make a start.

This glue is fab for sticking felt..the best I have used 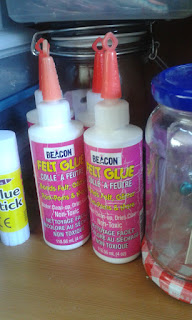 this is a selection of the little lot I made.....I don,t think I have ever made 2 the same....and I must of made maybe 25 over  the last year...... Well Santa needs lots of little helpers doesn't he? When I get inspiration I may even attempt to make a girl version..... 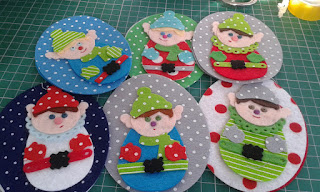 I also cut out some big mittens ... They are very small though, decoration size...I am going to join a pair together with elastic, did your mum  do that ? ...
..thread the elastic through your coat so you never lost your mittens?  My mum did..... 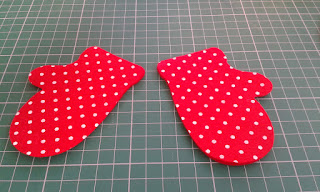 I didn,t do any stitching though as the glue is best left overnight to dry and to be fair even having washed my hands several times I still have dried glue stuck on some fingers!!! Need to dig a nail brush out.

Finally posted the season's swap and had a stroll, forgot to take the camera.....finding it hard to get motivated today.....DH says he feels the same...lots we could be getting on with..but just don,t feel like it.  Just one of those days I think. The lanes are full of leaves ..loving the colours..next time I go for a stroll will put my wellies on to crunch through the leaves ...what a big kid am I !!

Little Miss is making a chicken and leek pie in school today so tea taken care off.   She made a
quiche last week and I have to say it was the best quiche I have ever tasted and I love quiche, and consider I make a "pretty mean " one but she trumped me , and oh proud she was ..bless her. DH
picked  some runner beans to go with the pie , but I don,t think there will be many more..really disappointing the small amount we got this year.  Hopefully next year in beds (fingers crossed) we will do much better.