My pupster is 5 today 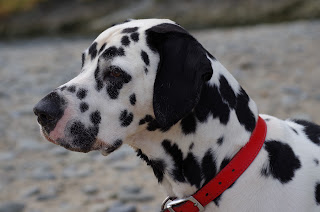 If you look closely you will see Dextie has two spots so close
They are below his eye
Together they form a love heart
I love that heart
nature made him that way
he is VERY spotty like his mum
Some Dally's in comparison hardly have
any
Yes I am bias but he is such
A very lovely part of our family.
I cannot believe he is 5 today.!!

Well this is the tale of how we got our boy.
One day when Little Miss was about 4 we
We're walking in the park and a naughty , cheeky
poodle jumped up and stole her ice cream.

That little act would cause absolute misery for my little
girl and us for over 3 years.
She refused to go to the park unless she was in a pram,
and when she saw a dog would hide under blankets.
I could be driving along and suddenly she would scream out
in fear if she saw a dog
very dangerous as the outburst would be sudden
and could distract my attention..
One day I feared I would have a accident
I too found myself always looking for dogs.
Her fear and it was an absolute terror
of dogs had to be addressed
and somehow we had to get her
used to dogs of all sizes.

So , like everything that the kids don,t like or understand
I had a plan, in a controlled, gentle
way introduce the offending subject.
I had tried visits to an animal rescue place
distressing for her and the dogs..
Not the answer.
Dogs quite rightly so are everywhere..
This  problem was not going to go away
it just could not go on..
thankfully Little Man was fine
but would he soon develope a fear of his own!

DH had always wanted a Dalmatian
I always had dogs
mainly lab/German shepherd crosses and a poodle.

But when we got married we decided not
to get one because we worked long hours
And we're often out of the house
up to 12 hours
and that just would not be fair
on any pooch.

But
with me now at home full time ,
now was the time.
We decided at the weekend to start looking for a
Dally pup .  My plan was Little Miss would get used to a small dog
(Pup) and then get used to bigger and bigger dogs as the pup grew
into a large dog.
Luck was on our side ..

I kid
you not , we  found on Monday evening
a litter of 9 had been born that weekend!
We contacted the breeder and they had 3 dogs and
6 bitches
DH  wanted a dog not a bitch.
The breeder lived 30 mins away and lived
Near Hever Castle one of my favourite places.!!!
How lucky was that?
We had expected to have to travel
To different counties...
We always planned to meet not only
The mother but father too
I wanted to see the temperament
Of both
that's why we didn,t get a Heinz 57

We had to be as sure as one can be
The pup would have a good temperament,
if not our problem
would only worsen and it was not
Our plan that we would then have to
give the pup back for re homing. 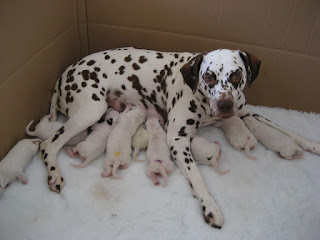 This was the first picture we were sent .

Dexter's mum "Twiggy" is a liver/white dally
Here she is with the pups only a few days old.
All the pups turned out black/white
they are born white and the spots develope
during the following weeks
(Dexter is still developing spots !!) 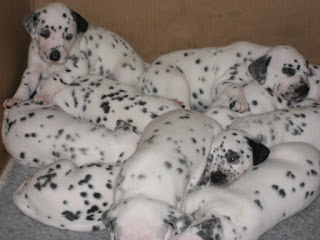 Dexter is at the top left of the above picture
He obviously was always going to be "top dog"!!!
He has a row of slanting spots that start
just above his nose... 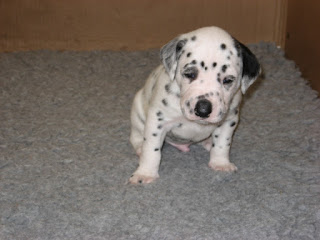 Here is our little chap on the day we picked
Him, he was 4 weeks old
Unlike his two brothers, he was a very
Confident , nosey little boy
And he seemed to respond well to noise
Unfortunately Dally's
Are prone to deafness and deaf pups have to
Be put to sleep
But our boy passed his hearing test  with flying colours.
He has full hearing in both ears, his brothers only
have  hearing in one ear , but that is fine
But you can,t breed from them without full hearing though.

This handsome chap is dad,
"Gunner"
We visited his owners too as we wanted to check out
His temperment too.
His owners are part of the Dalmatian Club of GB.
What they don,t know about Dalmatians is not worth knowing.
When we visited I felt we were being interrogated!!
They were lovely but wanted to know that we knew what we were taking on ! 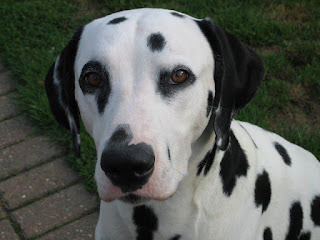 Dalmatians are very strong minded
dogs, they can become quite a handful
If you let them..
Dexter was no  different .
Thankfully having dogs all my childhood ,
I had the experience to know what he was up to
and play him at his own game!!
He was a stubborn pup
he tried to be top dog over us
no chance  pupster !!!
Finally he found where his pecking
order was and it was not top dog!
but we picked well
he is a very affectionate chap
a great house dog
and so protective of us
but that is all in his breed.
Dalmatians used to protect stage coaches
they are faithful and loyal
and "working" dogs
They are full of energy and need
Lots of exercise.

Little Lady was part of everything when we decided
to get our boy,
the breeder was great
Sending regular pictures and updates.
Little Miss helped make a blanket
for the new pup
and yes she was nervous for a day or two
when he arrived ,
but within a week she helped feed him,
played  in the garden with him.
Then his first walk in the park in the snow
was amazing. ...she
wasn't in a pram, dogs of all size  everywhere
And
She was fine, fear gone
problem solved
And
we had a much loved new addition to
Our family.

Off now for a birthday walk...

Email ThisBlogThis!Share to TwitterShare to FacebookShare to Pinterest
Labels: Dexter