No you are not imagining it, I am back.

Thank you for all your kind messages .  Life certainly did get in the way and the break I envisaged has been much longer than I planned, but I'm back and that is all that matters.

I thought I would start by giving a little update as to what's going on and what we've been up too.
Little Miss, is not so little any more, she has passed me height wise and I can't believe she will very soon be a teenager.  Her anxiety issues remain and I guess we have just learnt to cope with them as best we can.  Little man too has had a growth spurt and remains the comedian of the house , we are soon going to be making his application for him to attend his sister's unit at high school...time is whizzing by.  DH has been suffering periods of chronic back pain and his arthritis (in many areas) has worsened too.  Walking is limited and he is trying new medication until hopefully he gets the right dosage and some "normality" returns and he is not so housebound.  Last week he managed a tiny walk into Carmarthen to choose some paint with me , but then returned to wait in the car whilst the children and I did the rest of the shop circuit we needed.  Oh and not forgetting Dexter of course.
Dexter has had a birthday , as has little man, since I last posted.  As always he is my shadow , & although only 6 now he seems to be sleeping a little more I've noticed.

Apart from some English paper piecing, sewing amongst other things has been put on the back burner.  My basket of works in progress has not shrunk at all.  At the end of November we have one Christmas fair...this is the only one I have planned this year.  In my little break I found time to really step back and use the time to realise that I needed to step back and "downsize" on the amount of other stuff I kept taking on .  So only one Christmas fair and a break from swapping for a while this year.

My new flower beds have matured beautifully and one will be extended .  Some of the shrubs planted have grown massively so they will be repositioned into the new space when our handyman digs it.  The patio kitchen garden served us really well all summer but is now looking a bit neglected although I still have some cabbage, chard , leeks and herbs going.

My attendance at WI has suffered over the last few months.  We had a long summer break, then a heavy cold , DH being ill and hospital appointments meant I couldn't go.  We do however have a meeting this Wednesday so fingers crossed. 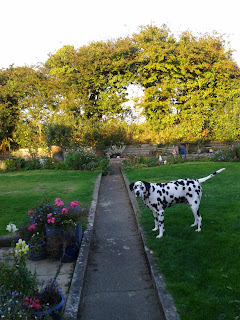 Dexter in the garden

It has been such a mild Autumn so far, still so
many flowers still blooming