The perils of ice cream!!!!

I am not joking , it could only happen to me , but it was funny, so I will share!

Yesterday the uniform ordered did not fit, but the lovely lady took all the blame and said she had ordered the wrong size as "they usually come up big" not on this occasion though!!! So hopefully the new stuff will be in by next Thursday, so it looks my plans to get everything labeled, ironed, little man's trousers shortened is going to be a mad rush after all.  Little Miss is asking if the ties are in , I know her and I see a little plan there, I think she has her eyes set on a little friend for Miss Mouse who has now become "Miss Coco Mouse" so I'm told.

Next tried to get new sports wear, again a big "no" she is size 6.5, in shoes and trainers 6 too small and 7 like boats, again no size 6.5. Try on the net was the suggestion, but wilth shoes I like to try them on and not have the trouble of sending them back when they don,t.  Then joggers, again not her size.....should of gone home then , the signs showed it was going to be one of those days. But, no, we decided to do the boring food shop.

Little Miss is obsessed with a certain pink ice cream chocolate lolly and it has only been released here recently.
We left the boys in the car listening to "boys music" think it was Queen or similar and off we went.
Although I leave the frozen stuff to last , Little Miss wanted to see first if the little pink things were in multi packs yet, so off we went. I didn,t take my glasses, again a big mistake and I thought I spotted them in a back freezer and somehow as I learnt across the man standing next to me moved and he was only up to my chest and well we sort of collided.  I hate moments like that when you both step back smile awkwardly , apologise and walk away.  Not this time though! Bless him he looked very happy with himself, and started following us around the shop telling me his life story.  I try to be kind
at times like this , I think poor man, must be lonely, maybe a widower etc etc but I just couldn't loose
him despite my best efforts.  Then very loudly "excuse me but that's MY husband" , of course everyone looked , I went red as I always do when embarrassed, and this poor man was grabbed and marched off like a naughty little boy......he told me as we had wandered the aisles he had been
married 62year, he realised after 2 weeks married life was not for him but he'd never asked for a divorce because he couldn't,t get a word in edge ways !  I understand why now !!lol.  We grabbed the ice creams and quickly got through the checkouts, every now and then having a quick look to make sure I wasn,t being followed again.  When I told hubby he shook his head "it could only happen to you!" I tried vainly to protest my innocence to no avail, after all he must be 82 if he's a day and not a
Brad Pitt lookalike (not that I like Brad Pitt but you get my drift)!!!
Little Miss was really laughing by now at her poor mother, but I had the final laugh when she said "Daddy he was very old like you and had grey hair too!" Another look , shake of the head and the music was turned up......what a day! 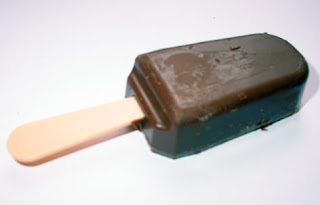 I knew ice cream was bad for you!
I think I might be avoiding that supermarket for a while
Especially on Thursday afternoons!!!!
See you soon