We jingled all the way...

Christmas Eve we were blessed with a rainbow.... But first blustery rain after a very dark start, but for a time blue skies appeared 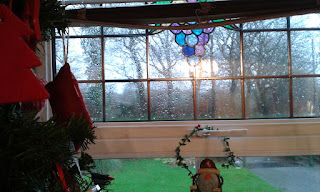 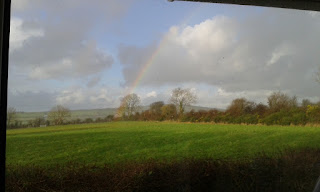 The  big day started as it always has since their very first Christmas .  Me getting up and laying out the presents , putting the heating on and waiting and waiting and........then at 8.30ish I can't wait any longer so wake DH up and then wake up the children .  Am I the only mum that has to wake her children up on Christmas morning? No one can believe it as they say their kids wake them at some  unearthly hour and have to tell them  go back to bed! Not in this house..!!!

Anyway rewind a little to the night before...


Santa brought little man a proper size punch bag.  Well as we knew it was coming we bought  the
sand in to weigh it down.  Boy were those bags heavy! After seeing on Santa tracking that he was in Europe, the children put on their wellies and coats, put out the "magical" reindeer food on the drive and did Santa and Rudolph's treats.  Off they ran to bed, giggles all the way , no protests , no trying to get a few minutes extra to stay up they couldn't wait (or so it seemed ) to get into bed and THEN......

The punch bag was in a huge box so I should of guessed it too would be huge !
As it happened the base of the punch bag was very big but only had a small hole to fill it ! and oh the sand was wet when we opened the bag .... and we just knew we'd still be filling it come Easter if we used the sand and probably could only use a spoon with the hole so stupidly small. So we had to reject the sand idea and use water instead. So we topped up our glasses of fizz and using our kettle and the biggest jug and funnel we could find we started to fill it.. Then for the next hour we went back and forward to fill it.  Then I wrapped it and we sat down looked at each other and burst out laughing.  How many other parents like us were doing the same, figuring out how things worked,
how to assemble things , fitting batteries etc etc and knackered like us as a result!!! But it was a huge
success.... Our Little Man well I think we made his Christmas,
he opened his other presents and we had kept the playroom door shut.so when it was the punch bag
turn .....we blindfolded him , lead him into the play room and when he opened his eyes, he said " have you wrapped a human!!"  The punch bag top is the shape of a torso....well the fright on his face was so funny.. He thought we had wrapped up someone .I know I'm wicked  but it was really funny  and I laughed so much I had tears rolling down my cheeks. Little Miss too looked a bit worried , so we said "oh no unwrap him he can't breathe!!! " he tore the paper off, stood back ... And our reward was our little boy jumping up and down shouting "yes yes....I can do my training now" throwing his fists in the air ,  I have only seen him this happy once before and that was when we got Dextie.


Then after a quick tidy and bags of wrapping paper put out, a quick Hoover , order was restored .

DH and the children bought me scented candles, perfume and some other goodies including
a ceramic candle holder which is quite tall and makes a beautiful centre piece for the dining
room table at the moment, but will I think be moved to the fireplace mantel after Christmas.

Little Miss fancied her nails being painted, I did that....all sparkles ... One of her stocking fillers...DH pottered, I dressed the table... I did go for that stroll yesterday and my the holly centre piece this year was made with my sweet girl helping. 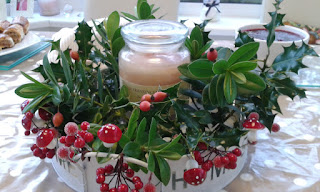 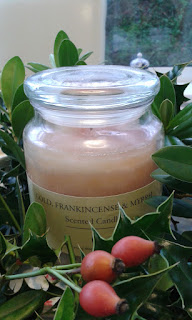 Santa brought DH some boxing gloves too and he and son had loads of fun playing ..no sorry .."training" on the punch bag..boys and their toys. !!! Us girls watched telly, played games, I did some stitchery and helped my girl get to grips with sewing a little project of a fox.  For her it is hard but she isn't giving up and I am so proud of her...I will show you what it is when she has done a little more, the fox is sewn onto a wooden grid. 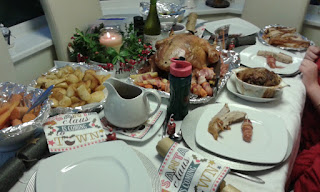 and afterwards we all crashed out on the sofa , children playing with their new toys and things, us watching telly.  Dexter snoring by the fire after he had some turkey.  He is now a slim boy again having lost 4 kilos.!!!!The vet was really happy last week ....it was hard for,dear Dextie but then you have to be cruel to be kind and we didn't want our boy to be fat and prone to all sort of nasties.  He has one kilo to go but even pupster needs a Christmas treat. He had a new Christmas pud toy and rope thing and spent the morning playing in his bed.


The kids had nibbles later but me and DH couldn't face it.  The fridge was  full and so were we.
The next day bubble and squeak discs were frozen..soup  and stock made and frozen and we have during the following days nibbled our way through the rest.

Boxing Day I planned and did.as little as possible.  I did some more sewing, caught  up on a pile of
magazines , watched some telly and new movies the children received and we  just chilled.

I opened swaps too over the days and will post those over the next few posts otherwise you may get "swapped out!" To say I have been overwhelmed by the gifts given in the swaps.  is an understatement.

The weather here continues to be awful and I so feel for the poor people up north...never a good time to be flooded but at this time especially it must be heartbreaking.

I am craving a bracing walk near the sea so hope if we have a rainless hour or two we can escape to do that.
I have my mum's birthday next week and want to sew her a little something. Sadly she is in a nursing home following a stroke several years ago and doesn't remember any of us now , but I will send a up to date photo of us , a little letter and her gifts .  I know the nurses will read it to her . , I used to ring her but that only caused her great confusion and upset , so now I no longer do that. One of my brothers will spend the day with her , but the rest of us have all moved all away, the furthest
living in Hong Kong and Phuket.

So as this year is pulling to a close , I am thoughtful over it's many events and the changes we have been through.  I don't make resolutions or plans for the New Year.  I have a little notebook where I have written down all the new things I would like to try to make,  and hope this year to plan a little bit better and get organised for birthdays etc.   I have spent lazy afternoons looking on craft blogs and Pinterest and have found so many inspiring ideas, lots saved and some printed off, but nothing written in stone... Just thoughts or dreams  ... I think I have achieved a lot this year for me... And I am excited about a new year, one thing for sure is I am never bored ..... and for the first time is many years I have photos now of things I have made and done here  since July at least....... new blogging friends and new blogs made and found.  , all.  have brought lots of smiles and happiness ....

If I don't get a chance to get back before the New Year , I wish you and all those you love a wonderful and peaceful New Year....let's hope it's a happy, fun one.