Give them cake and we did.!!

As part of fund rising for Little Miss's new garden in the unit they held a cake stall in the main high school hall yesterday. 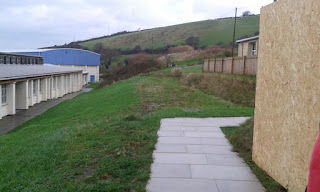 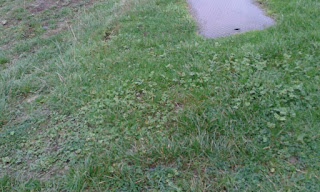 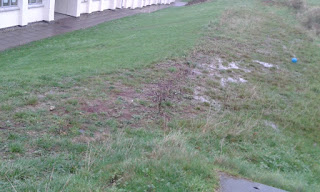 This is the intended space for the
new garden.
It is steep, muddy and totally waterlogged.
It needs drains, foundations
and a huge retaining wall built.
The quotes are enormous for this work
to be carried out.


It was so dark inside the hall that I have no pics but we filled 5 tables full.  I made about 70 cakes and DH  is already on Santa's naughty list as he kept "stealing"  them when I was trying to decorate them
! but 70 wasn't bad.  I got to the school at 10.30 with my contribution and at 11 we opened.  I didn't
realise just how much kids LOVE cake!  My Little Man won't touch the stuff and Little Miss is
very"selective" but these kids were like locust.

I kid you not there must have been 500 cupcakes and well the kids swarmed , every cake was 50p and   they flew.  Four children, me and 3 teachers helped and it was fun and I imagine a good contribution was made.  I have offered to donate a little table of goodies for the unit too, to sell at it's little Christmas show...I don't imagine the fair on tonight will be a big seller and well as you know I don't do the shows for profit, I do them for my kids and well as Little Man will be going to this unit too in 2 years (hopefully)
he too as well as Little Miss and all the other kids  will benefit from and enjoy a beautiful garden.  I can always make more  decorations next year!!! It's part of my preparing for Christmas tradition
now!!


I drove home slowly the wind was strong and the roads muddy and the leaves causing
their own hazard, but you know when you have that happy feeling......I had that.  I loved meeting  the
other kids in Little Miss' class and now can picture them when she talks so happily about school.

And then later a text.....a lady in a local shop wants me to pop in......????,
I was a little surprised and confused, then another text arrived to explain....
well a mutual friend told the shop lady about me (she works in the shop part-time) and my making and she wants to see me!!! She sounded excited and it would be a
proper order thing not sale or return.  I have now e mailed her and told her and clarified that I cannot
mass produce, that I enjoy my hobby and take time to make things as well as I can and with my home
life I cannot suddenly make 10 of anything.  I have said I want to continue  with the fairs and she is
fine with that.   So I will let you know how it goes...maybe another adventure?

After another school review we drove home and although bad for weeks driving home the winds were really high. Branches that  in the space of a couple of hours that when we drove through the lanes to the review had obviously still been attached to trees, had  had enough and fallen.  We counted one very large one and at least 6 smaller one, one I dragged to the side but there seems to be a few too that looked dangerously close to falling.  Then we came across two power cables down.


Now my DH does not do "masterful"!! He is a happy , go with the flow sort of guy so when he said
"You're not doing that fair tonight!, these lanes are dark enough as it is, but with the bad weather and the chance of more cables coming down, well you don't need to go out and I don't want you out in it!"

I knew it wasn't a question and he was really worried.  As he said , if a cable was down and with only headlights to see, heavy rain and more wind I might not see it and well risk me and Little Miss having an accident.

I did think about it and had to agree it probably wasn't worth it.  I rang the organiser explained and
have arranged to pay for the pitch (the least I could do). So Christmas fairs have finished for us this year.  As I write this, the wind is howling all around us and the rain lashing against the windows so
hard ,  so I admit I am not sorry to be home, safe and cosy.


I have just read a very , very funny story on a email about a love triangle!!!  My friend has started a
small holding in April this year.....not far from here in West Wales..she and hubby and her boys are all new to this life and I love hearing her news.  So I thought it might bring you a grin or smile....

We visited them back in half term and met 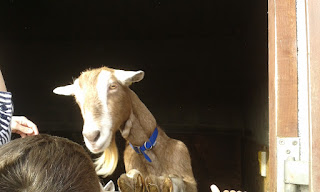 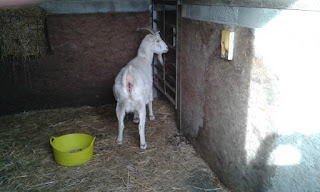 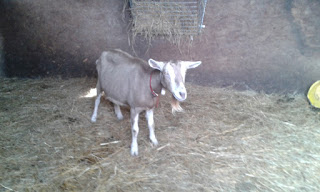 They were in the shed after having had some grooming and "inspections" and  were expecting the imminent arrival of "Jerry" ..yes named after a character from the old 70's show here in the uk "The Good Life"..sorry no picture of him, but apparently a young ram ready for "action" and destined to be Margot's " Billy ."

Anyway he was meant to be for Margot but he and the other girls had other ideas!!! Apparently there was lots of funny tongue poking, noises of the angry sort and head butting between the girls while
his lordship looked on , admiring his hareem !  She tells me the girls did not want to "share" him at all!! However nature has taken its course as it does .Anyway my friend suspects two of the girls are with kid now , she said they are just so docile and look "loved up" her words not mine !!! The other one she is not sure about but a scan by the vet in January will reveal all!