Oh dear!!' I wanted subtle but got bling!

The decorations are done, tweaked here and there and now everyone is happy.  Well now I stand back  and just potter my favourite thing... Nothing makes me happier than to potter.
We did consider getting a real tree this year, but memories of a certain spotty pupster made us rethink!!
Well dextie thinks every live tree is worth a tiddle against so old faithful artificial trees  again have been put up.  No doggie tiddles  inside thank you very much...puppy days are a pleasant distant memory , i do not want the repetition of when he was a pup and tiddles up again the Christmas tree again and again !!!
DH asked why we never have twinkling lights...so much to my regret ..oh my why oh why did I say go on buy what you want ?!?!  And so after DH Christmas shopping at Carmarthen , we went to Tesco.  Out of the blue I spotted a new lovely blogging friend who I met a few weeks ago dear Bovey Belle
we  had a huge hug , so lovely to see her, well her hubby and mine must of thought hey what's going on until we explained..lots of smiles and our men smiled when we explained, I am sure neither of us are up to embracing strange women in supermarkets !!!!! What were the odds of us bumping into each other? I don't know but it made me smile.
After a quick chat...
well  I let husband then choose new lights.....he asked what I thought and I said White or clear would be lovely.  I didn't take much notice what he chose. Well we came home and he was all smiles, said he just had to do the lights straight away!, anyway  he put the new lights on and I know he is a northerner but our lights would not have put Blackpool illuminations to shame. Green, blue, red and yellow, they have some sort of random sequence where they blink every now and then and then suddenly seem to explode a little time later into blast of colour like a soundless firework display...oh dear not my cup of tea,!!! but DH said they are the best lights ever!!!!! Oh dear!  Even now 6 days
later they still startle me ....  I will be happily sitting in my armchair, needle or hook of some variety
in hand and all of a sudden they are off again, a few dropped stitches have occurred as a result!!! And the worst bit..... The kids love them...they say they are the best lights they have ever seen....so outnumbered 3 to 1 I may just have to get used to them ...... 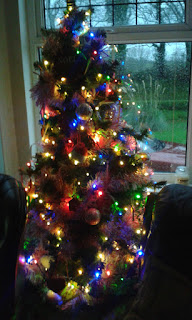 
What a week...  A lovely week.  Hats to be made still for the Christmas show...Pom Pom maker to find in the annex......need to find it to make bobbles for the hats..according to my internet "research" oh I hope they fit.   I have a few new projects to do with both children, one even little man I think will like, clay and cutters , so hard to find things Little Man may join in with... He might this time .   Next week is busy school wise , plays and concerts, parties and above all fun.  We are watching Christmas films and Christmas music in the background seems the
norm now at Breakfast and tea and when I fancy it in between . I find a Christmas jingle is keeping
me going on these dark school morning, when everyone is tired and so longing for the time off before
Christmas it seems everyone can still manage a smile and of course everyone who loves Christmas has a favourite song of course.

After all the Christmas making for gifts and the fair I have been so desperate to finish something
.....  anything that is just for us!!! Some new addition to our home, something ...anything!!!! Do you feel like that? Some non Christmas theme knitting is on hold..... The stitchery ongoing but that will take some time I expect ...so today I took the afternoon off to have a play........

Well that was after we decided to leave the house for some fresh air , because for the first time in days it had stopped raining.   We nipped down to Llangrannog .  The kids had ice cream!!!! I know!! It was perishing cold but that's what they wanted????? Then we had a wander on the beach... 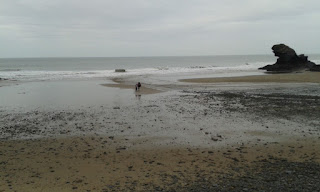 2 surfers were out ..they must of been bonkers' 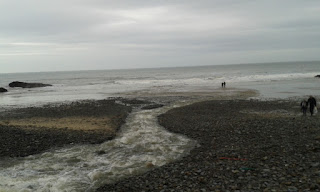 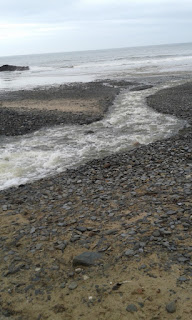 This stream leads down from all
our villages
it was so fast flowing
We have had so much rain..I was not
surprised at the amount...
during the week water has been pouring  off
fields near the main road ,
some little lanes have been flooded
and little streams also on others.

The beach
was deserted but a few people.
were in
the pubs and cafe
so we too nipped into
the Pentre Arms..
they have a huge picture window
overlooking the beach
and we sat there for a while
I was naughty, well it was after 1 o clock
and had a glass of wine
and DH was driving so had
coffee and the kids
crisps and lemonade.

It made such a change
not to be stuck inside again
Dextie
stayed at home
as he had tummy trouble this week
and we didn't want him
to get car sick
or drink sea water like
he always does!


I have quite a bit of Christmas fabric left...so once back home again I got
the  die cutter out, iron out (needs must very creased fabric!!!haha) big quilt square die out
and a hour and a bit later this little pile ready...160 in total enough for 40 squares.... 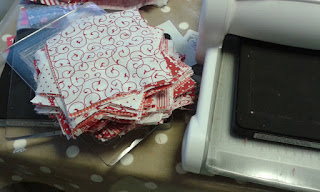 lots of scraps too , (but another idea for those), usually these go in the reject bin but oh not this time 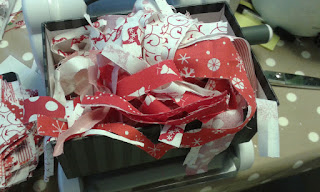 DH and Little Miss
made these while I was amusing myself .
Oh homemade baking smells
mmmmmmmmm 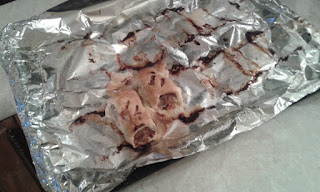 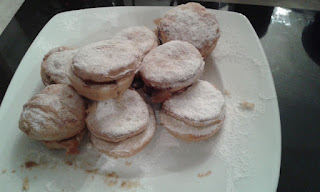 A few more glimpses of decorations.. 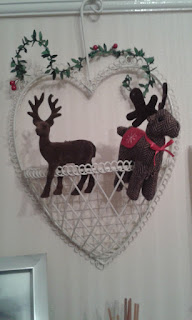 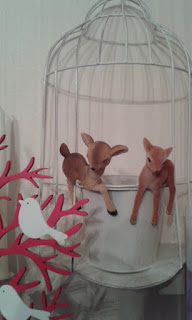 I love these deer, they  so remind me of
my childhood in the 70's  when
these  were in ours and my friends homes.

The elves on the shelves have arrived too
more about them another time
I just love
the old style decorations.