I got up yesterday morning at what I thought was 5.30am but you guessed it I hadn't changed my bedside clock ...so that meant when I awoke at 4.30 and couldn't get back to sleep I had in fact been awake since 3.30am and when I came downstairs and saw all the clocks showing 4.30am I was not a happy bunny, but decided I probably wouldn't fall asleep again so use the time to catch up on a few things.

Then I was in the kitchen and out of the corner of my eye saw a dor mouse scoot across the floor and dive under the washing machine.  Another bother!  I shut him in the utility room and set up a trap with a piece of kit Kat chocolate....those little critters love it, tried peanut butter before but oh so messy...kit Kat works every time...well fingers crossed it will this time too.  The trouble is pupster gets fed in there  plus the loo is on the other side , so how long he remains "contained" in anyone's guess.  Usually when we have a new resident you see signs of their occupancy but I haven't so hopefully he hasn't been here long but just in case I have put 3 humane traps down.  I keep telling DH we need a cat living here but he is having none of it...losing our two pussy cats a few years back when they were 17 upset him (big softy) but Dextie is obviously not a mouser so I suppose the fun of using traps continues.  Now if I had to kill a rat I would do it gladly but those cute little mice with black little eyes ...well I can't .....so when we catch one we taken it with us on pupster's walk and
that is usually several miles away and let them go...and I know if we had a cat any mice we had would be killed but yes I am a southern softie, hands up..I admit it, I bet Pam and Dawn my new blogging friends are rolling their eyes in disgust..ha ha ha.... But I can't despatch them and that's that and I know DH would run for the hills if I asked him too!!!! Back at our old house we never had mice until our cats died and as we backed onto woods and water there were lots of them..   So I think the
smell of cat alone is a deterant......my friend offered me the loan of her cat "fang" ..love that name !!!

But he is feral  and I mean feral!! Greets everyone with a hiss , spit and that mean sounding meow!!,  he is a "outside" cat, lives in a barn (very happily) and is a great mouser.  The trouble is pupster has never been close to a cat and I can only imagine the carnage my soft furnishings would suffer at the paws of  dear Fang!!!!!!so he would be a last option if the traps don't attract the little blighter(s). My friend said if there is one then there are usually more! "Oh joyous" was my reply..I hope not !!! In two years we have caught 3 so I suppose one every 6 months isn't that bad living in the back of beyond . The kids are forever leaving the back porch door open (in and out of the garden) so I know that's how the mice probably get in .  So anyway  , let's hope Mr Mouse has a chocolate addiction !!!!(in my experience they usually do) and doesn't have any mates or his own "open house" policy !!!!

Well I have been craft stall making not for me but for a friend to donate for a stall in aid of a worthwhile charity or two.  My new toy has been in action and has been worth it's weight in gold...in
fact my friend (in her seventies) says she is seriously tempted to buy one too.  She has dreadful
arthritis in her hands and fingers but she can still machine and has sewn all her life and made some
beautiful patchwork quilts.  She finds cutting really painful now (hence my help) and seeing speed
the quilting dies cut made her think she might be able to start sewing again.


Well by lunch time I gave in and had to have a nap and then after a hour refreshed got some cross stitching out and did that for a bit.  I also done some more sewing on my quilt panel, adding some
beads this time.   I so love this and I am determined it will be hanging up for Christmas.  It also has
matching mini panels that I am hand sewing to.  I can't decide whether to make mini cushions, big cushions of bunting with them.  Decisions .....decisions....... 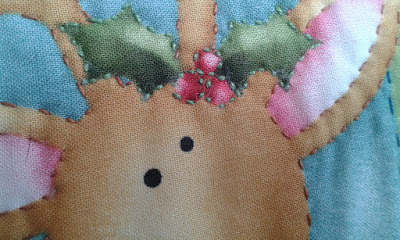 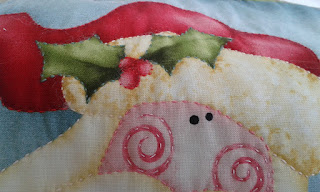 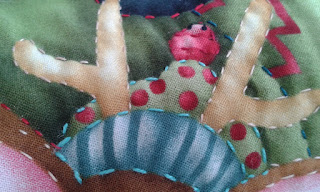 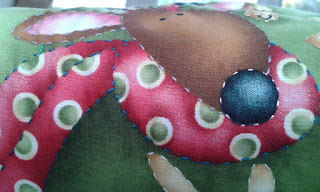 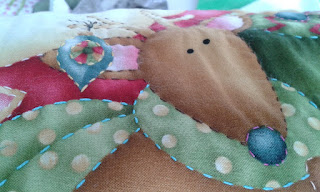 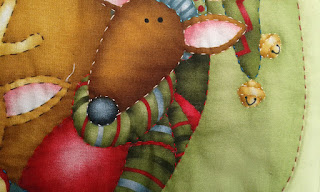 then the doorbell rang and more loveliness coming through my door!! Last week we decided to rehome a Victorian looking iron single bed we had.  It was in perfect condition and was in our spare room and well being single we decided to get a double instead.  Anyway I offered it to a neighbour and she was so delighted and I insisted we didn't want anything for it.  Then this afternoon her grandson arrived with  the new Jurassic dvd for the kids and a lovely bottle of wine for us.  I was really taken a back ..... And wow I know what Little Man wants to watch later!!!!


Little update ........it's.  Tuesday morning , first thing, found one trap has been sprung, yippeeee, it is a boxed in trap, so not going to open it here in the house , feels heavy, well that's is a mouse is "heavy" but a shake and it feels occupied !!!!!

Off later to go shopping so will hopefully have the chance to "set him free" that's if he is in there.
Will let you know next time.

Email ThisBlogThis!Share to TwitterShare to FacebookShare to Pinterest
Labels: Mice