Hi everyone, don't know about you but I think January has rushed by.  Although nearly 8.30am here it is still very dark outside , the wind is howling but no rain though I doubt it won't be far behind.

DH's birthday is this week so yesterday we hopped over to New Quay for sit down fish and chips and had a nice couple of hours out.  I forgot to take any pictures but the sea was very choppy .  We have a fish man that calls every Thursday and he told DH the price of fish has increased a bit because of the weather and less and less boats venturing out.   I don't blame them.  The other day at the inner harbour at Aberaeron the sea was crashing and I mean crashing against the moored boats and reaching quite high on the harbour wall.  Gertrude may have left us but I believe Henry is on the way...this winter seems to be a troublesome one for many.

This week not much creating I'm afraid.  I have been out every day with one thing or another and have been so grateful upon my return each day to find a kettle full of piping hot water and a nice warm kitchen courtesy of our Rayburn. 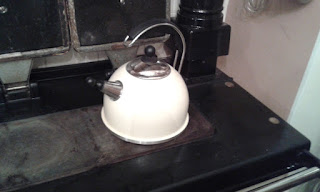 Oh I do love my Rayburn.
We joke that Dextie has the best bed in the house.
His bed  is in front of the dresser
which is alongside the Rayburn.....he is always cosy.

Another happy for me was finding a local shop (5 miles away..local for us!!) now sells these bad boys! 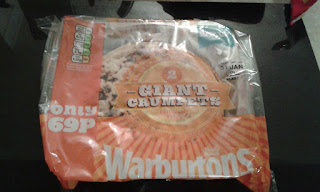 Bigger is definitely better when it comes
to crumpets.

Oh I love crumpets! I only have one and smother it in black cherry jam! Bliss!  Simple pleasures.

The spare room is now ready for the new bed (due to be delivered week after next) .after my mad rush to empty it out , our decorator was delayed in starting as he injured his shoulder, but it is all done now .  I am looking forward to making it look nice and cosy.  Next week we hope to pop out and get some new sheets and pillowcases...everything else has been already bought.

During the week Little Miss has been really helping cooking at home, she gets such joy from it.  At
school she made this lovely. A pasta cheese with pancetta, mushrooms and sweet corn. 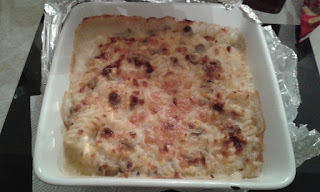 I had an appointment at her school this week and I asked her teacher just how much of the cooking
she actually does.  "Everything" was the reply  , apparently she gets quite annoyed if she can't do it
all.

As you know I love linen etc and going through a drawer this week I found these... 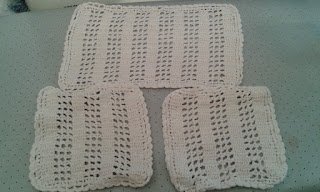 These were given to me on my wedding morning , handmade by a neighbour.  Rose was probably in her eighties then, I think she had special needs and had always lived with her sister and brother in law.  I always remember seeing her come to the door holding a crotchet hook and project in her hand .
Rose is obviously long gone now but finding these whizzed me back to my childhood home (like a scene in the Disney film "Ratatouille " when the food critic is transported back in time when he hurts his knee.   )I remember Rose holding my hand on my wedding morning and telling me these dollies (I have two sets, identical just in different shades) were dressing table sets.  Well when we moved here we bought the houses' original bedroom furniture and for the first time since being a little girl I had a dressing table again.  So I have washed them and they are now where I can see them everyday.  I haven't given London or Kent much thought since I moved here but I must admit for a little while I
did feel a bit homesick. 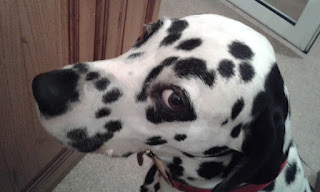 Who ate all the chews?
(Found a empty packet of five that must of
"fallen " out of my shopping bag!!
That face says it all....
"Guilty as charged!"

Well I think that's all for now.  I have loads of photos to upload and hopefully soon will be getting into the swing of blogging more again.  This month has been a busy one and I am hoping a few days when I can disappear into the dining room (my temporary craft space in winter) and do some serious!!! making.