"A word in your ear"

Those were the words DH whispered to me one day last week,  the sentence  finished with ,"you are hoarding again"  I am sure I mentioned that before we moved here just over 2 years ago I had numerous trips to declutter to either charity shops or the tip...well.  There I was in my very favourite junk shop, more like a warehouse really , in Cardigan, with him and Little Miss.  Little Miss was having a routine physio assessment and due to the time of the appointment we decided a day off was called for.  We had just had brunch in our favourite cafe.  "What did he say?" asked our daughter and he repeated his observation for her benefit.  Her reply " us girls are making our home beautiful for you boys!" We all laughed.   That's my girl I thought . I did mention to DH there were loads of boys stuff like old hand tools he could look at, but no that man of mine has no sense of rummaging for hidden treasures, he has no soul for that sort of thing. Boot fairs, flea markets ? he only goes if he is bribed with a) he can take a iPad and b) he is feed lots of tea, cake or chips or a hot dog!  Anyway I digress....rarely I come away single handed, as I pointed out I am not a shoes, handbag or clothes sort of girl so the odd quid here or there spent on a little treasure that makes me happy and won't break the bank , means a happy wife and ultimately him a happy husband too.  That's my logic anyway!

I must admit my darling girl found the most hideous deer ornament.. I tried to reason with her, but no she was adamant ... 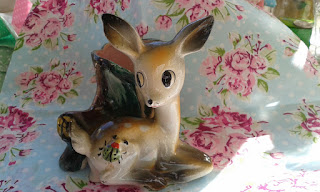 She loved it ( she has a thing for deer and mice)  so it was bought for 50p on condition once washed it  stays in her bedroom!!!!

Remember the green Bon Bon dish I found this to sort of match...again 50p.
Slightly different shade of green, but lovely all the same... 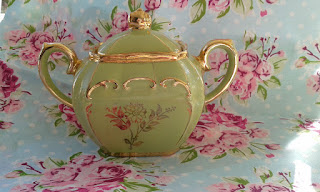 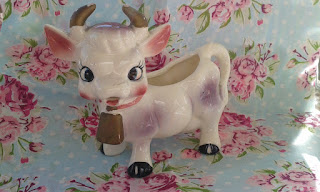 
The lady there , in the warehouse is so friendly  and we have become quite frequent visitors  maybe once or twice a month......"yep" said husband "she sees you coming and wonders what tat she can
unload in your direction, that's why she smiles when she sees you!" I told you , he has no soul!!!
Though I did laugh because he is probably right and I bet she was joyous to get rid of the deer ornament ..."saw you coming" sprung to mind. Anyway she  had a nice little bag of good linen which
she had put to one side , she told me she thought I would be popping in sometime.  That was a
donation to the lifeboat charity bucket .
I now have a bin bag full of linen to be pre soaked, washed  , probably washed again and sorted .  At this rate we are going to be way on course to start making
some crazy vintage quilt things.  I can't decide if the linen or China are the most addictive!


I am not after any sympathy.... I am at that age when apparently things start to appear and go wrong like arthritis ..... (According to my big sister who I never argue with bless her !!).
especially if your in your late forties , female and there is a history of it in your family.  Tick all of those boxes for sure!

Do you remember the fingers, well now my knee wants to join in the fun!! I was wondering when it was and it must be about 4 years ago. One day I came home in the rain and pupster who was nearly
fully grown, anyway he was big, came spreeding  down the narrow hallway to give me his usual
greeting, (jumps up and gives me big wet licks!!!) anyway he slipped on the wooden floor and
crashed into my knee knocking it one way, the pain !!and within a second as we were both trying to
stand up and get our balance he slipped again, and smacked into it again with all his weight knocking
it the other way. Well I was breathless, you know that pain when your brain well it is trying to work
out what the hell you have done? It wasn't Dextie's  fault just one of those things...look at him who could be cross ? 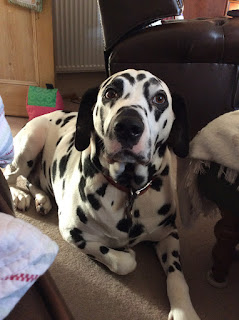 Well to cut a long story short it took weeks for the swelling to go and it hasn't been right since. it gives way every now and then, but now when out and about I am wearing a support.  It feels like my fingers on a big scale and although I haven't been to the doctors since moving here , I think I need to and it probably needs to be X rayed and see what's going on.  Anyway in the meantime thankfully it isn't too painful just feels like it is going to "give way".   No big walks  for me for a while and no disco dancing for sure.


So I have a bit of a dilemma.  I was hoping for one or more raised beds this year but with husband
banned from any manuel work and my dodgy knee and hand I am wondering what to do.  I have already bought some seeds and have some huge tubs here and there so maybe I will just have to see.
It is early spring after all , things change , as long as I have some salads , toms and some kale in and
of course beans at least that will be something.  .  I have bought some seeds for micro greens and once I have made some space on the kitchen window ledge will be getting those going .  I have volunteered to start some extra tomatoes and herbs off for the new unit as they do lots of cooking too,
and I thought the kids would enjoy the smell of toms and herbs growing too.
Nothing apart from daffs to show in the garden yet, even my tree lupin in a bit tub looks half dead .
The mole is having a great time in my front garden
blinking thing.  This lot in the last two weeks again.  Some "helpful" soul told me you must have lots of worms in your garden, great I thought but my gardens are mainly borders and hedges, different matter if they were for veg! 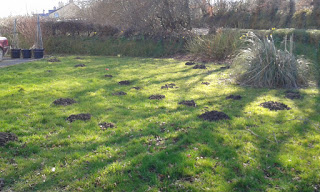 The bird feeder came a cropper in the last high winds and landed the other side of the front garden so I need to either try to repair it or find a replacement.   Even with a dodgy knee never a dull moment here.

On Saturday, a blue sky bright day we took the kids and Dexter to Aberporth beach and had fish and chips for lunch overlooking the sea.  On the way home, not far from home we had a stand off with a rather large sheep, the lane was narrow and it squeezed past the car eventually. The next farm we stopped.  This is a lovely farm, and I knocked and told the farmer s he probably had a loose one as the markings on it were red and blue and I sort of remembered her sheep have the same.  She sent her son and his mate off on a buggy thing to recapture the sheep , which she thought was one of her Rams.  "Keeps getting out "  she told me "don't know how though". I joked he was probably feed up with all the
noise his offspring were making and needed a break...she laughed at that.  She asked if the kids
wanted to go and have a peek in the lambing shed which of course they did. 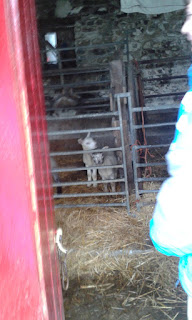 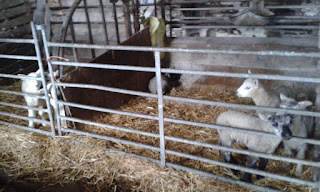 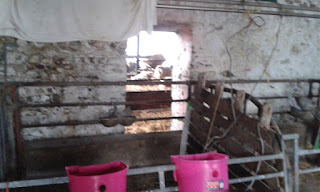 It was rather noisy
this distant picture is where the
Ewes in various stages of labour
were.

The farmer said this has been quite a unusual spring with so many triplet lambs being born.  More work and expense for her as those they can't get adopted by the ewes with only one lamb end up having to be bottle fed .  We stayed nattering for about 10 minutes (we did the same thing last year too) , as always she had some local gossip.

Afterwards home and a hour printing off some patterns , then picking out some fabric and just a lazy evening watching movies .  I need to get some bits made for fund raising for Little Miss' unit and a spring craft show.

Today the sun is shining and I may forget about the pile of ironing with my name on it and do some making instead... The dining room is awash with bright light seems a waste not to enjoy it.