For anyone interested 2 new swaps have been posted this week.  Kimberley at Creative Chaos and Tracy at Mad about bags are both doing one so if you fancy some fun pop over and join in the fun!

Here are the before and after pics.  Late Wednesday I decided I just couldn't bare the heather (inherited when we moved here) and the sheer volume of "elephant ears" so I decided Thursday I would "go for it". 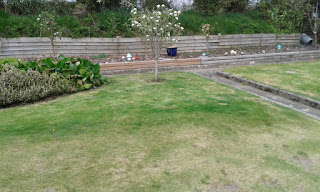 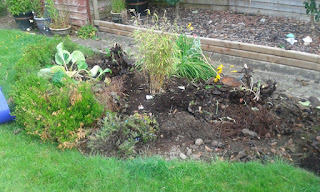 First
elephants ears cut severely back,
well the heather
took ages to cut back to get to the roots,
which then I dug out,
then new compost dug in
and the fun of planting began 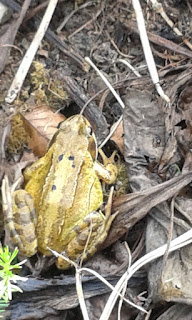 Found this little chap
and "relocated him under the miniature
bamboo..
he was quite large
and finding him ...
well it  gave me an idea... 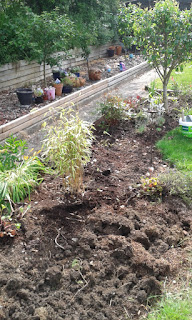 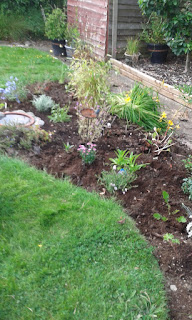 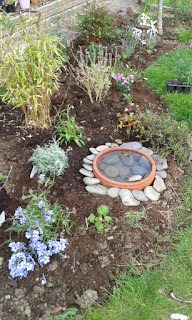 Complete with
a frog paddling pool...
and frog was,placed,in it
and I must say looked
rather surprised...
but I have seen him in it again since 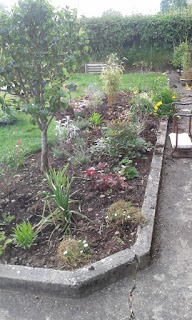 The new border now has hardy fuschia,
(2 varieties) , phlox, geraniums, sweet William,
snap dragons, astilbe ,  lupin, carnation ,
to name a few
over the months some evergreens
will be added

Chris dug the opposite border yesterday for me .
Again it is quite long
but I have the plants for it
and they haven't cost much.
Most will be repotted from planters
and pots dotted around the garden.
I can use those pots then for
Annuals and plants that can't tolerate
the heavy soil here.

It's pouring here at the moment
so more planting may have to wait.

The funny thing is DH is rather impressed
and gardens are not "his thing"
impressed,so much that is
he wants to go shopping
next week to get some
roses!!